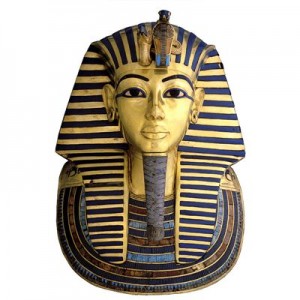 Since pre-history there has been drawing and painting. Some of the finest known examples of mankind’s first art were revealed in 1942 when paintings of animals — like the horses, bisons and mammoths seen here — were found on the walls of a cave at Lascaux in southern France. Since then cave art has come to light in other parts of the world. We can only guess that prehistoric people felt there was magic power in making drawings of the animals they hunted.

Very much later, paintings were made to be decorative. The Musicians, on the wall of a tomb in Italy, tells us about Etruscan life 2,500 years ago. But few paintings as old as this have survived. They are more easily lost than stone sculptures and objects made of metals. Down the years countless wonderful works of art have rotted away or been burnt; so we are lucky to be able to look at these long-surviving masterpieces.

Much ancient art in museums today lay buried for centuries. Its unearthing made some archaeologists famous. Howard Carter, an Englishman digging in 1922 in the Valley of the Kings in Egypt, proved that his guess had been right: Tutankhamun’s was the only Egyptian royal tomb left that had not been discovered and robbed. The Golden Effigy of this Pharaoh, who died when he was eighteen, was found inside three gold coffins. It is a mask decorated with glass and precious stones.

The Dragon of Bel Marduk, made of glazed bricks, comes from Babylon, the city built around 600BC by King Nebuchadnezzar. Early this century several dragon reliefs were found on a huge gateway there that was carted off to Berlin, where it can still be seen. Other Mesopotamian treasures seen in this set were made by the Assyrians and Persians.

The carved scene of horses and riders is a marble slab from a 160m long ‘frieze’ illustrating a famous Greek procession in honour of the goddess Athena. It ran around the ‘cella’ and porticoes inside the Parthenon, a 5th century BC temple in Athens. Centuries later, in 1687, the Parthenon was blown up when the Turks stored gunpowder in it while being besieged by the Venetians. In 1799 a British ambassador in Constantinople called Lord Elgin, anxious to preserve the damaged sculptures, transported two shiploads, including 47 surviving slabs, back to England. Nearly half the original frieze was reassembled in the British Museum. Today the Greeks say the The Elgin Marbles, should be returned.

In 1820 a French Ambassador took two marble pieces of a broken sculpture found on the island of Melos to Paris, where they were put together. Today, the armless Venus of Milo and the other most famous woman in art — the Mona Lisa of 1504 by Leonardo — both have places of honour in one of the most important museums in the world, the Louvre.