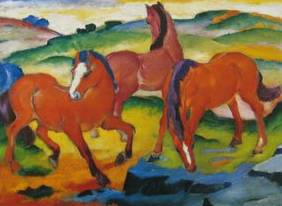 A MEDLEY OF HORSES (wallcard)

These paintings demonstrate that there are many ways of looking at the same subject.   In each picture the painter’s imagination has played with something familiar to us all.  Gericault’s horse looks frightened and Renoir’s looks bold and jaunty.  Marc’s friendly Red Horses are quite unlike De Stal’s stark Figure on a Horse; but both are painted in bright, unnatural colours. Gauguin’s romantic White Horse looks incapable of pulling a cartload of people, as Rousseau’s little white pony is doing.  Since olden times, people have had a special feeling for horses: they say that the mad Roman Emperor Caligula even tried to have his horse appointed a Consul.  Over the centuries national figures have made public appearances on horseback — we have all seen pictures of the Queen riding side-saddle at the Trooping of the Colour ceremony.  That is why in painting and sculpture countless military leaders, like Napoleon, have been portrayed on their favourite mounts holding the reins of power.   The horse used to be the animal of warfare.  This gave its natural beauty an almost religious importance in artists’ eyes.

The most ambitious equestrian statue was attempted in the fifteenth century by Leonardo da Vinci.  He tried to design a colossal horse rearing, poised only on its hind legs.  He made scores of drawings, but after years spent studying how to make the back legs strong enough for the weight, he had to settle for an animal with three feet on the ground.  Meanwhile, his patron, the Duke of Milan, ran out of money and had the seventy tons of metal he had earmarked to cast the sculpture in bronze made into cannonballs.  Leonardo’s huge clay model was destroyed it is said by French archers who used it for target practice.  Perhaps the most admired horses in art are the four bronzes that stand guard over the doorway of St. Mark’s Cathedral in Venice.  We do not know whether these extraordinarily life-like creatures were made by Greek or Roman sculptors, but they have been in Venice since 1204.  A few years ago one of these marvellous animals travelled to London and was exhibited at the Royal Academy.