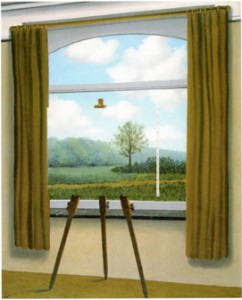 LOOKING THROUGH THE WINDOW (wallcard)

A picture has a frame, just like a window.  Paintings are often thought of as windows through which the viewer is invited to look at a painted glimpse of the world.  Of course, artists do not always paint what they see from their windows; but this is an easy way of choosing a subject to work on and one that anyone can try.  There is always a window to look through and many people grow fond of their own particular view of a garden or street.   If everyone was looking out of the same window, each of us would see things differently.  Some of the artists here have simply used a window as a starting point.  Others are expressing something seen in their imagination, rather than the actual view.  None of them have made an exact copy of the scene as they would see it in a photograph.

The Frenchman HENRI MATISSE (1869-1954) moved to Nice after the First World War attracted by the bright light and sunshine in the South of France.   He often painted colourful objects in front of windows; it is a Pumpkin in the picture here.  RAYMOND WINTZ (1884-1956) painted a holiday scene in Brittany, with his invitation to step through The Blue Door.   In his window frame the Spaniard JUAN GRIS (1887-1927) placed Cubist yet recognisable still life shapes.   But what exactly is JOHN BRATBY (1928-92) saying?  This English painter with a swirling brush who lived in Blackheath called his picture: ‘View from the studio window’ adding ‘its roots will break my studio floor’.  Could it be that he felt threatened by the tree?

The Parisian ROBERT DELAUNAY (1885-1941) made many paintings of the Eiffel Tower.  In this window view it appears to be moving and the houses around it tumbling down.   In utter contrast the Belgian Surrealist RENE MAGRITTE (1898-1967) MARC CHAGALL (1887-1985) was a Russian, who after the Revolution spent most of his time in France.  All through his long life he painted in a joyful style reminiscent of Russian folk art. With the hovering bird, his ‘Open window’ looks into a world of dreams.