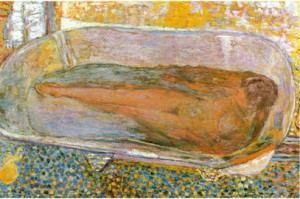 These pictures offer a glimpse of how European painters have depicted the human figure. Renaissance ‘humanists’ placed mankind at the centre of the universe.  Leonardo da Vinci‘s ‘Vetruvian Man’ showed how the proportions of a body could be measured — a figure with limbs outstretched fitting exactly in to a circle.

C15 and C16 Italian painters wanted their work to surpass the ‘beauty’ and ‘naturalness’ of the art of ancient Greece.  In the two panels from the Sistine Chapel ceiling in Rome Michelangelo diusplays his understanding of human anatomy and ability to add ‘physicality’ to painted and sculpted figures.  Earlier Botticelli had conveyed a true sense of harmony in his painting of the scantily-clad Three Graces —Pleasure, Chastity and Beauty — dancing on a mural in a Florentine villa.

Traditionally painters have been men, so the female form has been the subject of perpetual interest. Models were often the woman nearest to hand: in C17 Holland Rembrandt posed his mistress Heindricke Stoffles for the intimate ‘Woman bathing in a stream’.

In C19 ‘realism’ became the artistic concern. This is illustrated by Van Gogh‘s forceful ‘Digging Peasant’. Yet by 1900 — in a large picture of bathers — Cezanne placed crudely painted nudes in a landscape, seemingly interested in the effects of arranging figures on a flat surface.  Likewise, in ‘Nude in a bath tub’ Bonnard‘s wife has been totally blended into the overall composition.

Such figures appear distinctly unreal — like the sinuous dancers Matisse has threaded into a colourful pattern. Yet his ‘Dance’ expresses similar rhythms to Botticelli‘s, while Picasso‘s ‘Seated nude drying her foot’ and Michelangelo‘s nude were both inspired by the classical tradition.