This set is about having a good time doing such things as going to the circus, putting on fancy dress, playing games, making music, sailing and paddling at the seaside.  But some of the pictures have a double meaning, which makes them less simple than they look at first glance. Instead of making us feel happy, one or two of them are rather sad. JAMES ENSOR’s colourful painting called Carnival is noticeably odd.  As we know, a carnival is an old form of street entertainment, which still takes place today.  One of the best-known is organised by West Indians in Notting Hill Gate, London.  They happen on a public holiday, when people dress up and parade through the streets.  However, if we look closely, the faces in Ensor’s picture have peculiar smiles, because the people are wearing masks.  He did not think of carnivals as only about having fun.  For him a mask could smile, yet the person behind it might turn out to be a villain. 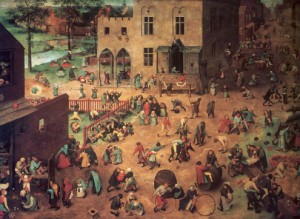 There are puzzles, too, in BRUEGHEL’s famous painting called Children’s Games.  Here, the canvas is crowded with tiny figures.  It is hard to count all the different games being played.  Yet the children look a bit strange and some of them seem far from cheerful.  Brueghel was a satirist, meaning that he sometimes made fun of people in a cruel way.  Incidentally, this painting is of great historic interest because it tells us what games were being played 400 years ago.  Games are handed down by children through the centuries, therefore quite a lot of the things going on in this picture are still happening in playgrounds today.  It is always a good idea to look for more than one meaning in a painting, although the other pictures here seem quite easy to understand.  PICASSO’s Parade, RENOIR’s Two Little Circus Girls and JEAN DUFY’s Circus Band capture the excitement of watching performers in the circus tent, called a Big Top. You can almost hear the noise as the clowns bang and blow while the band blares away in the background.

L.S. LOWRY, the painter of Match-stick men, had been watching holidaymakers on an English beach. Two of the paintings are by contemporary South American artists.  GRACIELA BOULANGER called her funny picture Tour de France, after the famous French bicycle race.  FERNANDO BOTERO takes a comic view of a dance band.