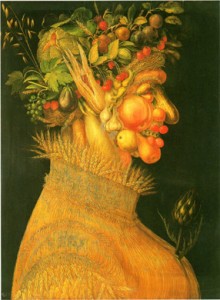 PEOPLE OF THE RENAISSANCE (wallcard)

Portraits are pictures of individual people. They can tell the viewer about someone’s character, or they may concentrate on presenting an image what a person represents especially if they are rich and powerful. Portraits became important in Renaissance times because people became more important. In the Middle Ages God was thought of as the centre of the Universe. Man was a lowly subordinate part of a race, a country or a section of society. By the 15th century a new humanist philosophy attached great significance to the individual, his particular qualities and his place in history. Renaissance painters painted what they were told by ‘patrons’ who could afford to enhance their social standing by commissioning costly, skillfully made things. They were craftsmen and, although increasingly respected, far removed from the more modern notion of the temperamental ‘artist’ expressing his soul without considering his customers. Patrons themselves began to appear in pictures. First they appeared as participants in religious scenes as seen here in the work of BENOZZO GOZZOLI (c.1421-1497), then singly on panels.

Dominating Florence for nearly 300 years, the Medici family used their vast fortune to encourage the arts. The cultured Lorenzo employed some of the greatest artists of the High Renaissance. A century after his father Piero commissioned GOZZOLI, his descendent Cosimo I, Grand Duke of Tuscany, made AGNOLO BRONZINO (1503 -1572) court painter to immortalise the nobility in his coldly elegant style. In Tudor England the painting of Royal portraits was a vital public relations excercise. HANS HOLBEIN (1497/8-1543) and NICHOLAS HILLYARD (1547-1619) had an important role in presenting the public at home and abroad with the regal and splendid personas of Henry VIII and Elizabeth I. The intellectual Austrian Hapsburg Emporers Maximillian II and Rudolph II were glorified by their Italian court painter GIUSEPPE ARCHIMBOLDO (1537-1593). His strange portraits composed of fruit and vegetables represent members of the dynasty and are elaborate allegories. Their hidden meanings include the Hapsburg’s universal power, symbolised by the fruits of the earth, and their eternal rule reflected in the ceaseless round of the seasons.

Patrons were not confined to the ruling classes. Merchants and scholars were also interested in preserving their likenesses for posterity, family and friends. HOLBEIN’s portraits of George Gisze and Erasmus are examples. Painting a self-portrait can be seen as an egotistical activity . In his self-examination ALBRECHT DURER (1471-1528) also presents propaganda for the emancipation of German artists from their lowly status and promotes the new Italian techniques he admired.