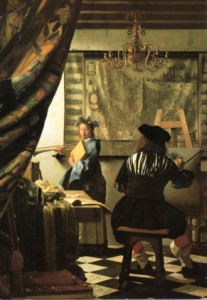 There is more to Dutch art than meets the eye. The Victorians collected Dutch pictures because they seemed so homely, so true to life. Before that they were despised by the classically orientated experts who thought them crude and without meaning. Recently we have learned to see them differently, and now rate Dutch painting as a unique phenomenon in art history.

We cannot use the term Dutch art before 1600, and heyday lasted a mere seventy five years. Holland as we now know it only appeared on the map in the early seventeenth century, the Dutch having gained their independence, and most importantly, religious freedom after long bitter struggles with their foreign rulers, the Spaniards. This new, self-governing country had been the northern half of Flanders, the remaining part was later called Belgium. The Dutch who founded the new state were protestants, puritans, ordinary people such as traders, peasants, craftsmen. A new type of patron, not the aristocrat sort, the educated class, but the merchant, the baker, the butcher, bought the pictures produced all of a sudden in incredible numbers responding to the emerging demands.

As Calvin’s Reformation frowned upon religious scenes, which had provided for hundreds of years the main artistic themes, the self-confident Dutch puritans invented new subjects which related to their own life, the here and now. Genre pictures, interiors, landscapes, seascapes, still-lifes, flower pieces, appeared for the first time. But they all have one feature in common — a recent discovery made by art historians: they all contain a moral message, suggested by symbols understood by every Dutchman of that time and for which we must look. Symbols of vanity, luxury, and of the transience of life the idea that all natural beauty will eventually decay.

Genre pictures which depict a single moment, not a story as hitherto, are packed with warning symbols. Peaceful landscapes are threatened by stormy skies, proud vessels are at the mercy of the sea, a beautiful, half-peeled lemon warns of the bitter content inside a gleaming exterior, flowers in full bloom will soon wither. All Dutch pictures are exquisitely painted images of this world with a moral message. To enjoy them to the full look for the key symbols.