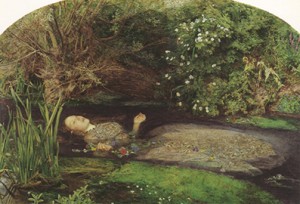 Most of these pictures tell stories — therefore they have to be pondered over. Two are illustrations of moments in Shakespeare: JOHN EVERETT MILLAIS (1829-96) has painted Ophelia drowning, after Hamlet killed her father; WILLIAM HOLMAN HUNT (1827-1910) has imagined what The Hireling Shepherd who neglected his sheep looked like, from a song in King Lear. The tragic RICHARD DADD (1819-87) painted his own fairy world, while The Doctor by LUKE FILDES (1844-1927) and The Travelling Companions by AUGUSTUS EGG (1816-93) describe on canvas the Victorian way of life.

Millais and Hunt painted their remarkable scenes shortly after they left the Royal Academy, where Millais had studied since the age of ten. Objecting to the style of Renaissance masters such as Raphael — whose works all art students were obliged to copy — they half-jokingly called themselves Pre-Raphaelites. Also, they followed the fashionable critic John Ruskin, who in the 1850s encouraged young artists to ‘go to Nature in all singleness of heart. . . rejecting nothing, selecting nothing and scorning nothing.’

They found the landscapes for these paintings along the river Ewell, in Surrey. Taking lodgings at Surbiton, they spent several months working on their backgrounds in painstaking detail, using the brightest colours.   Millais was pestered by swans, who ate the water weed he was painting. But he wrote to a friend: ‘I sit tailor fashion under an umbrella for eleven hours, with a mug within reach to satisfy my thirst…’

Back home in Chelsea, he made the girl who posed as Ophelia lie in a bath of water, and painted ‘her clothes spread wide’, as Shakespeare had put it. ‘And mermaid-like awhile they bore her up…’ The model, Lizzie Siddal, caught cold and her father sued him for the doctor’s bill.   Also an artist, she married another Pre-Raphaelite —DANTE GABRIEL ROSSETTI (1828-82).   Girls like her and the ones who posed for the romantic La Ghirlandata were called ‘stunners’ by the Victorians.

The Pre-Raphaelites turned their backs on worldly subjects and found legends and writings of the past to paint.   Fildes and Egg were simply commenting on life around them.   In those day both kinds of picture were immensely popular.   Nowadays, however, JAMES ABBOTT McNEILL WHISTLER (1834-1903, born American, lived in London) is often more highly regarded than his fellow Victorians. He was neither a ‘literary’ nor a ‘social realist’ painter — believing, like ‘modern’ artists, that the most important things to put on canvas were harmonious shapes and colours. His stunner — The Little White Girl — he preferred to call Symphony in White.