PAINTERS WITH A MESSAGE

The artists of the past whom we call Old Masters were marvellous and inspired.   But very few of them were free to paint exactly what they wished.   The masters they obeyed were usually the patrons who paid them to produce paintings on certain kinds of subjects — nearly always Bible stories, heroic scenes from history, or portraits.   Painters were also expected to illustrate ‘real life’ in an idealised way — everyone should look happy and good.

During the eighteenth century artists began to paint subjects of their own choice. So far only the Dutch school had broken through this barrier; but a change in people’s attitudes to the whole purpose of painting emerged from ideas leading to the French Revolution and following in its wake.

The mood of the times encouraged some artists to cast a critical eye on the society in which they lived. Such people often led difficult lives themselves, just because they were candid and even satirical — meaning that they made men and women, or customs, look ridiculous. They had few patrons. However, by that time large numbers of prints could be made of their paintings — or they were print-makers themselves — so their work often became well-known and popular. 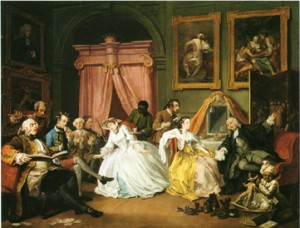 The Londoner WILLIAM HOGARTH (1697-1764) made ‘picture stories’ about life in mid-eighteenth century England. His famous Marriage à la Mode sets out to make us laugh at the way the aristocracy arranged marriages for money.    His stories can be read like a sermon and unfold like scenes in a theatre. He himself said: ‘my picture is my stage, and men and women my players, who by means of certain actions and gestures are made to exhibit a dumb show.’

The bold style of FRANCISCO GOYA (1746-1828) — a painter at the Spanish Court — excited the earliest ‘modern’ artists. His portraits of the royal family were daringly impudent. He was one of the first people to use art for a political purpose:  his famous etchings of The Disasters of War recorded the brutal behaviour of Napoleon’s troops in Spain.   Here one can feel the horror of the execution of 3rd May, 1808.

The Frenchmen HONORE DAUMIER (1808-79) and JEAN FRANCOIS MILLET (1814-75) were friends in adversity. Daumier — sometimes called ‘the father of caricature’ — went to prison for his anti-monarchist cartoons. Like Millet he painted pictures of people in an honest way, with that provocative element of ‘realism’.   GUSTAVE COURBET (1819-77) imagined that a socialist world would be created by looking at his pictures. Such artists were spreading a new message about life as it really is.