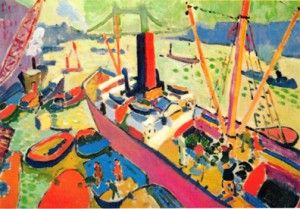 Dazzlingly bright, unnatural colours, daubed on with reckless abandon, scandalised the Parisian public when canvases by a group of young artists were exhibited in 1905. Their bold defiance of tradition earned them the nickname “Les FAUVES” — Wild beasts. They included HENRI MATTISSE (1869-1954), MAURICE VLAMINK (1876-1958) and ANDRE DERAIN (1880-1954). RAOUL DUFY (1877-1953) exhibited with them the following year.

These painters used violent, contrasting colours in simplified areas to show their feelings on a flat surface in a spontaneous, instinctive way. For them, expressing what they felt about the landscapes, objects and people they painted was more important than creating an exact visual representation.

Groups of young painters in Germany used strong, dramatic colours in a similar way. Influenced by angular medieval woodcuts and primitive African art they used exaggerated, distorted shapes to express themselves with honesty and impact, becoming known as EXPRESSIONISTS.

Another artist community led by ERNST KIRCHNER (1880-1938) and KARL SCHMIDT- ROTTLUFF (b.1884) was called “Der BRUCKE” — The Bridge — meaning the way to a better future. Hoping to change a society with which they felt at odds, they too produced an idealistic ‘Programme’.

The German paintings are often harsh, disturbing and intense — cries of spiritual pain and longing. The Frenchmen, by contrast, tend to celebrate the warm richness of life and their sensations of delight and enjoyment.

Some of these artists perished in the First World War. Others went on to experiment with new ways of painting, but sixty years later, the FAUVE and EXPRESSIONIST movements are seen as having had a revolutionary impact on the art of the 20th century.