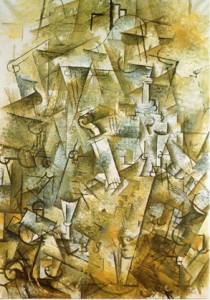 Painters and musical composers work in two different mediums, but they use a common ‘language’.   A painting can be as full of rhythm as, say, a pop song — and can be composed in either a harmonious or a discordant way.   A piece of music can be ‘colourful’ and — like notes on a piano — a paintbox has a ‘scale’ of tones.

Some people find that a musical sound reminds them of a particular colour —this sensation is called ‘synaesthetic’. In the nineteenth century, to prove that music can be used to conjure up visual images, the Russian compose Mussorsky wrote a piece for the piano called Pictures in an Exhibition in which the listener is conducted through a musical art gallery.

In these pictures the artists have all chosen music as their theme. Three have painted street musicians, who in the past were a more familiar sight in cities than they are today. MARC CHAGALL (1887-1985) portrays a violinist; ANTONI CLAVE (b.1913) a flautist and PABLO PICASSO (1881-1973) an old guitarist , a girl with a mandolin and a Greek god playing his pipes.   RAOUL DUFY (1877-1953) pays tribute — in a modern idiom — to the eighteenth century composer Mozart.

Cubism is the name given to a style of painting invented around 1909 largely by Picasso and GEORGES BRAQUE (1882-1963).   Renaissance painters had wanted to disguise the fact that a piece of canvas is flat: to this end they perfected the use of perspective. Artists working in Paris in the first decade of this century accepted that flatness was a quality that made painting different from all the other arts.

Like PAUL CEZANNE (1839-1906) before them, Picasso and Braque explored new ways of placing three-dimensional objects on a flat surface.  Braque recalled in his memoirs that they had been ‘roped together like mountaineers’. Perhaps pursuing the thought-provoking new philosophy of Henri Bergson (1859-1941), they questioned whether it was possible to know what anything really looked like. An object can always be seen from various angles, therefore its shape and colour is constantly changing. That is why the objects in Braque’s Violin and Pipe and Picasso’s Girl with a Mandolin look so unusual. In different ways these are both classic Cubist works.