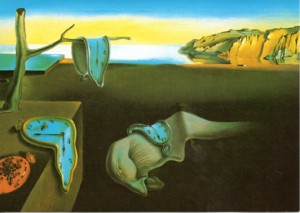 THE WORLD OF SURREALISM AND DADA (wallcard)

If these pictures make you jump — or better still give you an uneasy feeling — then the artists who painted them would be satisfied. The Surrealists liked to jog people into what they called ‘a crisis of consciousness’.  That sounds pretty strange; but it is worth looking into the ideas that led them to this odd ambition. For one thing, they inspired many later artists, photographers and film-makers.

The artists here belonged to the Surrealist ‘movement’ launched in Paris in l924, when the poet Andre Breton (1896-1966) produced a famous Manifesto.   His revolutionary message was that ‘rationalism’ was no longer a valid way of thinking. After all, he said, that was what had led to the First World War.  He claimed that the ‘irrational’ — in the form of dreams and all that goes on subconsciously — was an important, but neglected, side of life. However, he believed it was possible for poets and artists to explore this unknown world — and express it in their various ways to the rest of us. In the past such artists as Hieronymus Bosch had painted their dreams and fantasies;   but the followers of Breton could draw upon Freud’s psychological discoveries and try to approach the challenge more scientifically. 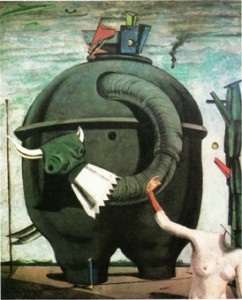 Surrealist artists experimented in two directions. One school, represented here by SALVADOR DALI (1904-89) and RENE MAGRITTE (1898-1967), usually set their bizarre images in a real-life landscape.  To confuse us further, they painted in a meticulously ‘realistic’ way. Tantalising things appear to be going on in their pictures, but we are never sure what they are.  The second group practised ‘automatic’ painting.  As in the party game called Consequences, they let their images emerge by chance.  An empty canvas was a blank page on which shapes and colours — selected accidentally — might trigger a response in the viewer’s subconscious.  JEAN ARP (1887-1966), began by dropping torn up bits of coloured paper.  He always used the random method.  JOAN MIRO (1893-1983) joined the Surrealists and wrote to a friend: ‘I confess I am often gripped by panic’.   His gay and colourful imagery, originally culled from dreams, became highly polished.  During his long life he most successfully promoted Surrealist art.

Arp and MAX ERNST (1891-1976) had first been Dadaists.  Dada was invented in 1915 by some young pacifists and drop-outs living in Zurich.  They believed that everything in the world was ‘bunk’, including art.  In the New York Dada Group, the Surrealist photographer and painter MAN RAY (1890-1977) met MARCEL DUCHAMP (1887-1968), who produced shocking ‘Ready Mades’ — his most famous were a lavatory signed R. Mutt and the Mona Lisa with a moustache.  In the earlier Nude descending a staircase (1912) he seems to be warming-up to Dada.