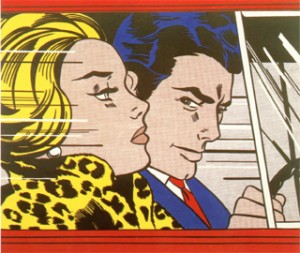 ABSTRACT EXPRESSIONISM AND POP ART (wallcard)
Seventy years ago American art was little known outside the United States. However, during the Second World War a style of painting emerged on the other side of the Atlantic that astonished the world. It was called Abstract Expressionism.
This new approach to painting was partly influenced by a few European artists who had fled from Nazi Germany to the United States, among them the Surrealist MARCEL DUCHAMP. Also, a recent exhibition in New York of the work of the Russian painter KANDINSKY had helped to clarify the principles underlying earlier abstract art. So, in the 1940s several American painters – working on a grand scale – produced unusual but compelling images that concentrated on ‘colour and form’ rather than ‘subject’.
During the 1930s some of the men who became big names in Abstract Expressionism, and made fortunes, had been employed by President Roosevelt’s Federal Art Project, which paid thousands’ of artists $24 a week and had encouraged the growth of urban artists’ communities mainly on the east coast. JACKSON POLLOCK, MARK ROTHKO and MORRIS LOUIS had all shared this useful experience.
POLLOCK’s immediate, massive and dramatic works soon became unmistakeable. He made completely abstract, swirling, twisting, splattered paintings. Laying huge canvases on the floor and armed with paint pots and brushes, he became the first ‘action painter’. He said that he was at ease working like this: ‘I feel nearer, more part of the painting, since this way I can walk round it, work from the four sides, and literally be in the painting’. In their different ways ROTHKO and LOUIS took a more deliberate approach.
In the late 1950s younger American painters reacted against what they saw as this poetic, soul searching kind of art. Keenly aware of their own popular culture – based around magazines and television – they produced a sharply contrasting style. Pop Art was confident,.gimmicky and fun – with a biting edge. Parody became its key ingredient – particularly of advertising and the mass market world. ROY LICHTENSTEIN’s large cartoon-style works incorporated colour simply with close-knit dots, as in colour printing.
Simultaneously, and lasting throughout the 1960s, Pop artists, among them DAVID HOCKNEY, RICHARD HAMILTON, RON KITAJ, PETER BLAKE and EDUARDO PAOLOZZI, had their heyday in Britain.